Skip to Main Content
This article is part of a series profiling the next generation of higher education innovators and leaders.

Chris Bustamante’s career in higher education has taken him from the halls of the Arizona statehouse, where he served as a lobbyist for the state’s largest community college system, to heading up community development and student services at the state’s largest two-year campus, Rio Salado College in Tempe. His varied background would perhaps make him an unusual choice to lead some colleges, but Rio Salado is far from a typical campus. 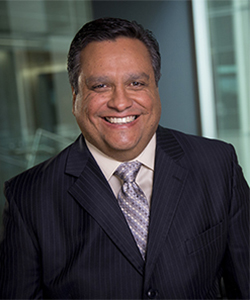 The college, part of the 10-campus Maricopa County Community College District, has 56,000 students, about 29,000 of whom solely take classes online. Many of those students attend other institutions and take a class or two at Rio Salado. As a result, Rio Salado offers 48 start dates a year for students—basically any Monday—rather than just two or three dates that correspond to the beginning of a new semester. Such an academic calendar might invite chaos on most campuses, but Rio Salado is able to successfully manage it with a workforce of 1,500 faculty members, of whom just about two dozen are full time.

While much of higher education is trying to figure out how to become more innovative in an era of new technology, changing student demographics, and falling state financial support, Rio Salado was founded with the mandate to be different. The idea behind Rio Salado, started in 1978, was what the then-chancellor of the system described as a “college without walls,” one that would be flexible and cost-effective and serve a fast-growing state that had few existing higher education options.

“We were set up to serve the nontraditional students, and wherever possible, where the universities or colleges weren’t serving,” Bustamante said.

In 1995, just a year after the first commercial web browser was introduced, the college launched its online program. Unlike some colleges that raced online to find a new source of students and revenue, Rio Salado was already serving students at a distance.

“We were sending instructional disks out through the mail, so online was a natural extension for us,” Bustamante said. Today, Rio Salado is one of the largest online higher education providers in the country, with students in 48 states.

When Bustamante took over as president in 2010 after a short stint as interim president, his job was to maintain the institution’s momentum. That’s a tall order for a college founded with a mission of innovation that was seeing other institutions begin to copy its successes, whether with online courses or a virtual advising system.

At some point in the history of any institution, inertia can take over and new ideas lose steam from “initiative fatigue”—a situation in which staff and faculty members view every potential project with skepticism. So how have Bustamante and Rio Salado continued to foster a culture of innovation, especially seven years into his presidency, a time when most college leaders are looking to move on?

First, Rio Salado uses data, not anecdotal evidence, to drive strategy. Colleges and universities often use data to drive major decisions—to start new majors or recruit students in different geographic markets—but many day-to-day decisions at institutions are made based on a leader’s experience or gut instincts. “Decisions made without data are sometimes based on wrong assumptions and limited knowledge,” Bustamante said. “When you’re using data as the foundation, it empowers people to make decisions knowing they can be easily defended.”

For instance, at Rio Salado, officials had always assumed that online students who transferred to nearby Arizona State University became online students there. But when officials analyzed the data, they discovered students typically enrolled as residential students. So advisers began discussing the handoff to residential campuses in their advising sessions with students.

Second, the college runs a variety of small experiments before embracing new ideas, and scales up those that work. It’s a page taken from the playbook of start-ups: fail fast, fail cheap. “We don’t waste too much time on bad ideas,” Bustamante said.

The college is in the middle of a five-year program, supported by a grant from the Bill & Melinda Gates Foundation, which is intended to take a group of 5,000 students and increase their degree completion rate by 50 percent over that of an average cohort of students at the institution. As part of the experiment, the college assigns students peer mentors, gives them an option of a credit-bearing course on how to successfully complete online classes, and expands the use of RioCompass, the college’s virtual advising system, which provides students with task lists and semester-by-semester degree plans.

The college also built up its capabilities to analyze data around student success with help from Civitas Learning, an education technology firm that specializes in predictive analytics. From those student records, officials found that completion rates increase substantially once students finish 40 credits, and even more so when they earn60 credits.

Rather than wait until the grant project ends to spread what’s working to other students, Rio Salado’s leaders are already putting some of what they have learned from the experiments into place. “It’s in our culture that if there is a better way of doing something, let’s do it,” Bustamante said. “Too many institutions wait too long—years, in some cases—for experiments to be completed, for multiple layers of approval, and by then the momentum for the idea is lost.”

Third, the college has streamlined communications between departments within the institution. Higher education institutions have a reputation for operating in silos, with little overlap between offices, schools, and departments. Putting new initiatives in place almost always requires the cooperation of staff and faculty members across campus, but too often critical personnel are left out. Bustamante leads a weekly meeting with a group of key faculty, deans, and vice presidents during which (or in which) they introduce new projects and discuss the progress of existing initiatives. “Without this meeting, they wouldn’t understand how things are connected. They wouldn’t talk to each other as much,” Bustamante said.

“We want to ensure there is communications flow—what’s the scope of the work, why it’s important, and is everyone clear on the assignments?” he added. “It sounds like a simple approach, but it doesn’t happen enough at most institutions. You need to spend as much time and effort on internal communications as you do on external communications."

Bustamante’s approach seems to be producing results, according to data from the U.S. Department of Education. Rio Salado’s two-year graduation rate—that is, the percentage of students who finish an associate’s degree in the normal two years—is four times higher than the average for 100 peer institutions. Its transfer rate is also higher. What’s more, Rio Salado’s instructional costs per full-time equivalent student is about half that of its peer group.

Bustamante said keeping costs low has been part of the college’s mission since its founding, but also is required because the state of Arizona continues to get out of the business of higher education. In the 1980s, the state contributed around a quarter of Maricopa’s budget; today it contributes basically nothing. So Rio Salado and the other campuses in the district depend more on tuition and local property taxes compared to most community colleges nationwide.

Since the Great Recession of 2008, other states are following Arizona’s lead in slicing appropriations to public colleges. Community colleges, in particular, without the admissions reach or private fundraising of four-year colleges, are trying to figure out how to do more with less.

“There’s a greater focus on outcomes with community colleges than ever before,” said Davis Jenkins, a senior research associate at the Community College Research Center at Teachers College, Columbia University.

Students are dropping out of community colleges in droves—only a third of them graduate. And while more than 80 percent of students at two-year colleges intend to earn a bachelor’s degree, only about a quarter end up transferring and only 17 percent complete a four-year degree, according to the center at Teachers College.

“So there’s a movement to get students on guided pathways to transfer or get a degree, and then adopting technologies, like Rio Salado has, to help students on that journey,” Jenkins said.

Bustamante said that while Rio Salado’s success is in many ways embedded in its culture as a young institution established for a unique mission, there is no reason why other colleges can’t learn from its approach.

“Colleges need to expose more of their teams to innovation and make them more data-aware to make the case for why the institution needs to change,” Bustamante said. “The problem is that at some institutions there are too many ‘momentum pauses,’ at the end of the semester, at the end of the year, or when key leaders leave. But innovation never ends,” he said.


Discover more about the author, Bill and Melinda Gates Foundation